The Siege of Boston began on April 19, 1775 after British troops retreated to Boston following the Battles of Lexington and Concord. With American artillery retrieved from Ft. Ticonderoga staring down at the town from Dorchester Heights, British General William Howe evacuated his troops and several thousand loyalists from Boston on March 17, 1776.

British army forces in North America were primarily tied up with the siege; therefore, the British planned an expedition to the southern colonies seeking bases of operations where they had more control. British General Henry Clinton was to travel to Cape Fear, North Carolina, where he would join with largely Scottish Loyalists raised in the North Carolina backcountry, and a force of 2,000 men from Ireland under the command of General Charles Cornwallis.

In January 1776, John Rutledge, a member of the Continental Congress, delivered information of the British plans to move into South Carolina. Rutledge organized defenses to be established on Sullivan’s Island to defend the city from an incursion by the British. Sullivan’s Island was a strategically suitable place to construct a fort, because it was a geographic shield to Charleston Harbor. Vessels sailing into Charleston had to cross Charleston Bar, which consisted of submerged sand banks south of the city.

Colonel William Moultrie and his 2nd South Carolina Regiment began building the fort on Sullivan’s Island in March 1776. The fort, named Fort Sullivan at the time, was planned as a square redoubt, with bastions at each corner. The construction was of an inner and an outer wall, made with palmetto trunks up to a height of twenty feet, with the sixteen-foot space between the walls filled with sand.

Clinton left Boston on January 20 and arrived at Cape Fear, North Carolina on March 12, expecting to find the European convoy already there. He met with the royal governors of North and South Carolina and learned that the recruited Scottish Loyalists had been defeated at Moore’s Creek Bridge two weeks earlier.

British Admiral Peter Parker’s fleet, which sailed from England with the Irish and General Cornwallis on board, encountered extreme difficulties crossing the Atlantic. Battered by storms and high seas, the first ships of the fleet did not arrive at Cape Fear until April 18, and Cornwallis did not arrive until May 3. After several weeks there,  Clinton, Cornwallis and Parker concluded that Cape Fear was not a suitable base for further operations.

Parker sent some of his fleet on scouting expeditions up and down the coast, and reports on the partially finished condition of the Charleston defenses were sufficiently promising that the decision was made to go there. By the time the British flotilla arrived off Charleston at the end of May 1776, the fort on Sullivan’s Island was unfinished, but was sufficiently advanced to provide a substantial defense to the city.

Congress had appointed General Charles Lee to command the Continental Army troops in the southern colonies. Lee arrived in Charleston shortly after the British fleet anchored outside the harbor, and he took command of the city’s defense. On seeing the uncompleted fort, he recommended that it be abandoned, describing it as a ‘Slaughter Pen’. Acting on Colonel Moultrie’s advice, Rutledge refused to leave the fort.

Arriving there in early June, British troops were landed on Long Island (now called Isle of Palms), near Sullivan’s Island. The intent was that these troops would wade across the channel (now known as Breach Inlet) between Long and Sullivan’s, which the British believed to be sufficiently shallow to do so, while the fleet bombarded Fort Sullivan. General Lee responded to the British landing with several defensive actions.

General Clinton encountered the first major problem of the attack plan on June 17. An attempt to wade the channel between the two islands established that part of the channel was at least shoulder-deep, too deep for troops to cross even without the prospect of enemy opposition.

On June 26, the British repositioned at Five Fathom Hole, ready for the assault. On the morning of June 28, 1776 at around 9:00 am, a British ship fired a signal gun indicating all was ready for the attack. Less than an hour later, nine warships had sailed into positions facing the fort.

A plan of the fort was prepared by an officer of the Royal Artillery, Lieutenant Colonel Thomas James after the battle. The plan showed 28 pieces of artillery in Fort Sullivan.  One is described as a mortar and the rest as being 32 and 26 pounders. If James was correct the British ships were heavily out-gunned by Fort Sullivan.

Around noon the frigates Sphinx, Syren, and Actaeon were sent on a roundabout route, avoiding some shoals, to take a position from which they could enfilade the fort’s main firing platform and also cover one of the main escape routes from the fort. However, all three ships grounded on an uncharted sandbar, and the riggings of Actaeon and Sphinx became entangled in the process. The British managed to refloat Sphinx and Syren, but Acteon remained grounded. 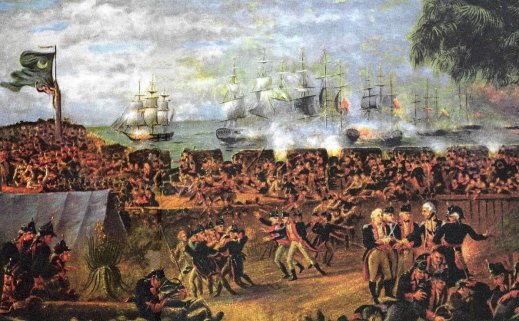 At the fort, Moultrie ordered his men to concentrate their fire on the two large man-of-war ships, Bristol and Experiment, which took hit after hit from the fort’s guns. Chain shot fired at Bristol eventually destroyed much of her rigging and severely damaged both the main- and mizzenmasts.

Admiral Parker eventually sought to destroy the fort’s walls with persistent broadside cannonades. This strategy failed due to the spongy nature of the palmetto wood used in its constructions; the structure would quiver, and it absorbed the cannonballs rather than splintering. The exchange continued until around 9:00 pm, when darkness forced a cessation of hostilities, and the fleet finally withdrew out of range. The following morning, the British, unable to drag the grounded Acteon off the sandbar, set fire to the ship to prevent her from falling into enemy hands.

The flag that flew over the fort during the battle was created by Colonel Moultrie when he was ordered to take over Fort Johnson on James Island in Charleston Harbor, South Carolina in 1775. It was the first United States flag flown in the south.

Moultrie designed a blue flag with a white crescent moon in the canton with the word “Liberty” on the moon. Keeping with this theme, Moultrie’s South Carolina regiments wore blue uniforms with a silver crescent on their caps and the words “Liberty or Death.” Moultrie chose the design to honor his soldiers and continued the tradition of using the crescent as a symbol of resistance to tyrannical rule.

During the battle, the pole holding up the Fort Moultrie Flag was broken by a cannon shot and the flag fell down outside the fort. Sergeant William Jasper, risking death from the bullets and cannon balls flying all around him, allegedly cried, “We cannot fight without a flag!” He replanted the flag on the walls of the fort, earning him a place of renown in the American Revolution.

The Battle of Sullivan’s Island was a decisive American victory over the British. The outcome on Sullivan’s Island would prevent other British efforts in Charleston for over three more years, and it revived the American spirit. The pride of victory at Sullivan Island was initiative for more Americans to support the break from Great Britain, because the victory was achieved against all odds.

Fort Sullivan was renamed Fort Moultrie in honor of Colonel William Moultrie’s success in defending Charleston. Today, the flag of the State of South Carolina is based on the Fort Moultrie Flag.

It is exactly the same as the original, except that the word “Liberty” is removed from the crescent and it has a Palmetto Tree added in the center of the blue field. The Palmetto Tree was added by the state during the Civil War. Several variations appeared during that time, but the version with the palmetto added, to represent the palmetto logs that were used at Fort Moultrie, is the one that survived as the official flag of South Carolina.

I visited Fort Moultrie recently. The following pictures are from my camera.

William Moultrie was promoted to Brigader General after the Battle of Sullivan’s Island. He died in 1805 at the age of 74 and was buried outside Charleston, in the family cemetery on his son’s property at Windsor Hill Plantation. The exact location of his body was unknown until 1977 when it was found by archeologists. On June 28, 1978, the remains of this Revolutionary War hero and early leader in South Carolina history were reinterred on Sullivan’s Island near the water at the Fort Moultrie Visitor Center. Today, William Moultrie’s grave is marked by a flagpole and a tombstone enclosed by iron fencing. 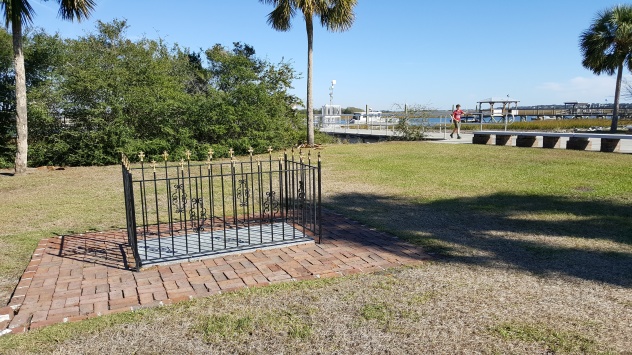 After South Carolina seceded from the Union in 1860, Fort Moultrie was abandoned for the stronger Fort Sumter across the harbor. The fort was modernized several times and was used as a defense in WWI and WWII. It was maintained until 1947. The fort fell into decay once again. In 1960, South Carolina transferred Fort Moultrie to the National Park Service as a unit of Fort Sumter National Monument. 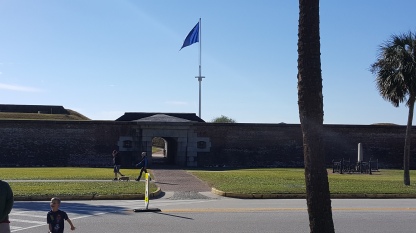 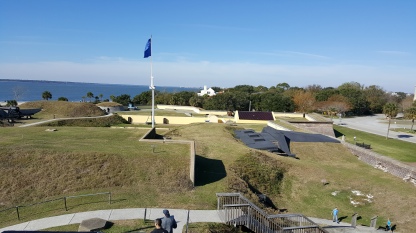 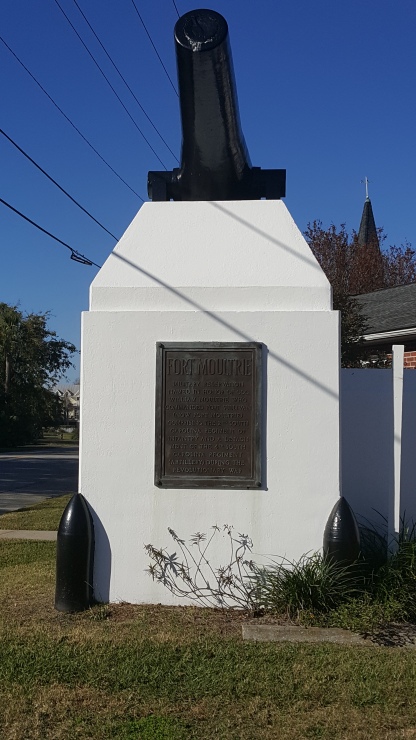 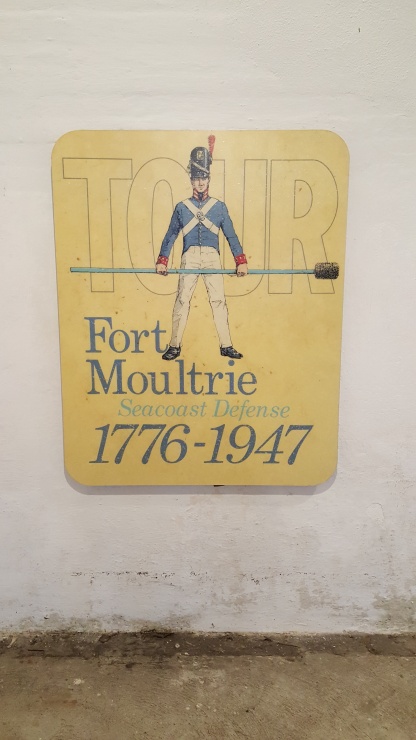