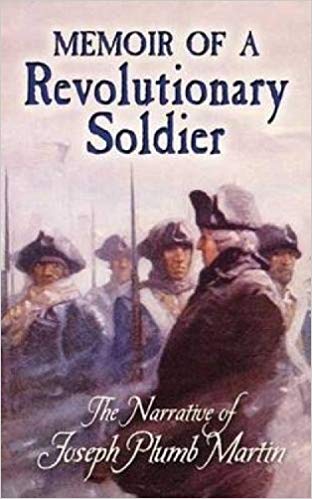 “Through much fatigue and many dangers past, The Warworn soldier’s braved his way at last.” ~~ Joseph Plumb Martin

I could think of no better way to express my love for this narrative except to offer a review. I’ve read countless quotes from Joseph’s memoir in books about the Revolutionary War and have written about him in my own novels. But to read his memoir in it’s entirety plunged me into his world during his nearly eight years of service with the Continental Army.

Joseph wrote and published his memoirs in 1830 at the age of 70. The book was lost to history, rediscover in the 1950’s, and published again in 1962. Like many memoirs, he may have embellished it, but it’s rooted in the experiences endured by the common soldier instead of the heroic accounts of men like Washington, Greene, and Knox. Nevertheless, this is an eye opening tale of suffering, endurance, and patriotism.

Joseph was born in Massachusetts on November 21, 1760, therefore he was just a teenager when he joined the army in 1776. At the time, he lived with his grandparents in Connecticut and had difficulty gaining their permission to enlist. He and his company were soon sent to New York where they saw action at Long Island, Kipp’s Bay, Harlem Heights, and White Plains.

Later in the war, he was at Germantown, the siege of Fort Mifflin, and the Battle of Monmouth. His company was shipped off to the Hudson Highlands and West Point. He spoke of Benedict Arnold’s treason and John Andre’s execution. He was with the unit of sappers at Yorktown who dug the parallel entrenchments used to besiege Cornwallis’ army.

In his memoir, Joseph paints a picture of camaraderie between he and his “messmates.” Their shared struggles with constant starvation, nakedness, lack of shelter, sickness, fatigue, and hard duty is a theme throughout.

“To have to lie, as I did, almost every other night on the cold and often wet ground… without a blanket, and with nothing but thin summer clothing, was tedious.”

“The army was now (Valley Forge) not only starved but naked; the greatest part were not only shirtless and barefoot, but destitute of all other clothing, especially blankets.”

“…I have often been so beat out with long and tedious marching, that I have fallen asleep while walking the road, and not been sensible of it till I have jostled against some one in the same situation;…”

He candidly wrote about the officers who made bad decisions, quartered in homes and ate well — “for they must have victuals, let the poor men fare as they would.” His detailed descriptions of the army’s failure to provide pay and provisions, his food foraging expeditions, and food sometimes provided to the soldiers by civilians underlies the desperation he experienced enduring starvation.

Yet amid all these descriptions of misery, Joseph demonstrates a sense of humor, compassion, courage, mischief, and admiration for “handsome ladies.” He refers to those who are killed or dies as “Poor young man!” or “Poor fellow!” When his regiment returns to White Plains, he sees that the Hessians who died at the battle there the year before are ill-buried and he feels sorry for them. “Here the Hessian sculls as thick as a bomb shells; — poor fellows! they were left unburied in a foreign land…”

When the war ended in 1783, he wrote that the happiness he had anticipated was not realized. “….there was as much sorrow as joy transfused on the occasion. We lived together as a family of brothers for several years (setting aside some little family squabbles, like most other families,) had shared with each other the hardships, dangers and sufferings incident to a soldier’s life…”

He concludes with after the war the soldiers were never given the land they were promised nor their yearly clothing allowance. But the heart rending message was how the country vilified them — the army was idle during the war or the militia could have done the job. The soldiers’ hardships were debased and underrated.

“President Monroe was the first of all our Presidents, except President Washington, who ever uttered a syllable in the ‘old soldiers’ favor.”

Of the voices of slander, he wrote:

“It was very easy for them to build castles in the air, but they had not felt the difficulty of making them stand there.”

“And now, kind Reader, I bid you a cordial and long farewell.” ~~ Joseph Plumb Martin

“Our country is in danger but not to be despaired of. Our enemies are numerous and powerful – but we have many friends. Determine to be free and Heaven and earth will aid the resolution. On you depend the fortunes of America. You are to decide the important question on which rest the happiness and liberty of millions yet unborn. Act worthy of yourselves.”  ~~ Dr. Joseph Warren

March 5, the fifth anniversary of the Boston Massacre fell on a Sunday. Therefore, the patriots observed the annual commemoration of the tragic clash that took place between British soldiers and town’s residents on Monday, March 6.

Unlike previous occasions of the event, British troops were abundant in Boston (most had been removed to Castle William after the massacre). Almost everyone, including British General Thomas Gage, expected trouble. The regulars were going to resent an oration whose purpose was, in the words of Samuel Adams, “to commemorate a massacre perpetuated by soldiers and to show the danger of standing armies.” Now, months of hostility on both sides propagated rumors that the British would arrest or assassinate the orator.

Joseph Warren had delivered the oration in 1772. He was asked to speak again. If there was trouble, Samuel Adams wanted someone of Joseph’s experience and resolve in the pulpit. This could well be the last time Gage would allow Patriots to freely assemble in Boston. If Gage was authorized to arrest patriot leaders, it may have been prudent for those leaders to leave town.

Joseph was not to be intimidated into silence. He focused his skills to provide an eloquent exposition of the Patriotic cause and an impressive theatrical performance.

A crowd of 5000 gathered at the Old South Meeting House; some were British officers. Samuel Adams invited them to sit in the pews directly in front of the pulpit so they “might have no pretense to behave ill.” This put the soldiers uncomfortably close to the many leading patriots in attendance. The officers were not only sitting in the pews, some, it is said, may have been seated on the steps leading up to the pulpit.

Around eleven o’clock in the morning, Joseph arrived in a carriage and proceeded to change into a toga in the shop across the street before entering Old South Meeting House. A toga was worn by a citizen of Rome and distinguished him from a soldier or a slave. At Harvard, Joseph had performed the play Cato with his classmates. This was Joseph realizing Cato in his own way in the present: the citizen unintimidated by Caesar’s tyrannical threats, declaiming to an honorable citizenry on behalf of liberty and a representative government.

Since the meetinghouse was jammed with people, Joseph was taken around to the back of the building, where he climbed a ladder to access the pulpit through the rear window. It was dramatic entrance that intensified the already surging emotions of the moment. For those who did not share his point of view, his “Demosthenian posture”, with a white handkerchief in his right hand, and his left hand in his breeches, was downright juvenile. Joseph began to speak in the high pitched nasal delivery of New England ministers. One loyalist commented on his “true puritanical whine.”

Joseph opened with a statement of natural rights. He went on to contend:

“And no man or body of man, can without being guilty of flagrant injustice, claim a right to dispose of the person or acquisitions of any other man, or body of men, unless it can be proved that such a right has arisen from some compact between the parties in which it has been explicitly and freely granted.”

Joseph’s biographer, Dr. Samuel Forman, translated and summarized passages from his speech. These are a few culminations of Joseph’s beliefs and observations:

He warned that tyrants did not hesitate to distort religious beliefs.

Britain became interested in the colony [Massachusetts] and came to a mutually beneficial relationship, only after the settlers had done all the hard work to establish it.

He focused the discourse on the responsibility of the individual to do their part for the maintenance of liberty.

He projected the view, uniting Patriots with British Whigs that the fate of liberty in America was crucial to liberty in Great Britain. He spoke to the present while being mindful of providing the foundation for a solid future.

There are two varying versions of what happened during his oration. A British officer displayed a handful of musket balls in a threatening manner. Joseph, who was steps higher on the podium, answered by dropping his white handkerchief that literally covered the officer’s gesture. A second story related by Thomas Hutchinson, speaks of a botched assassination attempt, that, if Dr. Warren said anything against the King, etc., an officer was to throw an egg in his face as a signal to draw swords and massacre John Hancock, Samuel Adams, and hundreds more.

At this point, Joseph launched into a passage he had written at the last minute, in which he insisted “an independence of Great Britain is not our aim” but went on to caution that if measures to do so “are ineffectual and it appears that the only way to safety is through fields of blood, I know you will not turn your faces from your foes”.

When Joseph spoke of the events of March 5, 1770, instead of dwelling on the brutality of the soldiers, he focused on the agony and despair of the families who had lost loved ones that night. His father died in 1755, after falling from a ladder while working in the Warren family orchard. The tragic accident was witnessed by his youngest brother, John, who was only two years old at the time. Joseph may have been drawing upon his own traumatic memories when he spoke of a widow and her children witnessing the death of a husband and parent.

“Come widowed mourner, here satiate thy grief; behold the murdered husband gasping on the ground, and to complete the pompous show of wretchedness, bring in each hand thy infant children to bewail their father’s fate. Take heed, ye orphan babes, lest, whilst your streaming eyes are fixed upon the ghastly corpse, your feet glide on the stones bespattered with your father’s brain.”

The British responded to Joseph’s Boston Massacre Oration with ridicule. On March 15, 1775, British officers and Loyalists gathered on King Street and then proceeded to the nearby British Coffee House where they conducted a mock town meeting. The orator, loyalist physician Thomas Bolton, began to read a satirical lampoon of Joseph’s oration.

When Joseph began his speech on March 6, he had humbly insisted that his own words could not match those of previous orators such as James Lovell, Dr. Benjamin Church, and John Hancock. The contemptuous discourse that derided Joseph’s humility, accused him of poisoning street thug and fellow Son of Liberty William Molineux, and scoffed at his association with the atheist Dr. Thomas Young, among other things, may have been written by the traitorous Benjamin Church himself. It was character assassination.

Bolton read “I cannot boast the ignorance of Hancock, the insolence of Adams, the absurdity of Rowe, the arrogance of Lee, the vicious life and untimely death of Molineux, the turgid bombast of Warren, the treason of Quincy, the hypocrisy of Cooper, nor the principals of Young.”

The Rivington Tory press in New York printed Bolton’s speech. It was ignored by Patriots at that time and did not advance the cause of Loyalism.