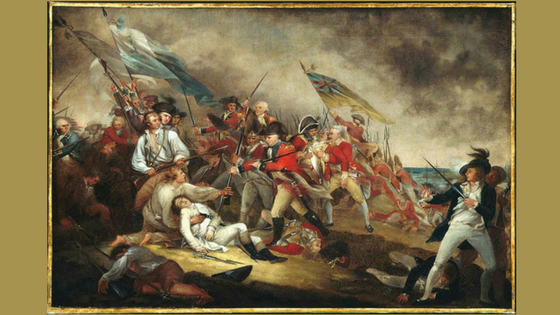 “On the 17th of June, my father was again called from Salem by the sound of the firing of cannon, and by the flames of Charlestown. I well recollect the pathetic and glowing description he gave me…of his lonely march on that night.” ~~ Dr. Edward Warren writing about his father, Dr. John Warren’s journey after the Battle of Bunker Hill.

Twenty-two-year-old John Warren tried to pass the British sentries guarding the Charlestown peninsula to search for his missing oldest brother, Dr. Joseph Warren, who held a major general commission at the time of the battle. John’s pleas were answered with a bayonet to the chest. He bore the physical scar of grief for the rest of his life.

“Accordingly, in the morning about two o’clock, I prepared myself, and went off on horseback, and when I arrived at Medford, received the melancholy and distressing tidings that my brother was missing. Upon this dreadful intelligence I went immediately to Cambridge, and inquired of almost ever person I saw whether they could give me any information of him [Joseph]. Some told me he was undoubtedly alive and well, others, that he was wounded; and others, that he fell on the field.

“This perplexed me almost to distraction. I went on inquiring, with a solicitude which was such a mixture of hope and fear, as none but one who has felt it can form any conception of. In this manner I passed several days, every days’ information diminishing the probability of his safety.”

At that time, it was impossible to reconcile what happened during the fierce and confused melee of the battle. Who was involved and the circumstances where not clear. That the British obtained possession of the ground was all that could be known.

But the extreme distress and susceptibility of John Warren’s state of mind was evident in the young doctor’s journal entries. His indignation was directed at the British ministries and not the king himself. He writes of Joseph’s death as if it were murder, and of Joseph’s four young orphaned children.

“Unfeeling wretches! reflect a moment, if you have still one feature of humanity which is obliterated from your minds, and view the helpless orphan bereft of its fond and only parent, stript of every comfort of life, driven into an inhospitable wild, and exposed to all the misery which is the result of your brutal violence.”

The siege of Boston came to an end nine months later, on March 17, 1776. In late March, John and his older brother, Eben, walked the theater where the scene of the bloody battle had been acted on Breed’s Hill. Perhaps, Paul Revere, Joseph’s close friend, was with the Warren brothers as they searched the hillocks under which the remains of dead heroes laid. It is said that an Englishman claimed to have witnessed Joseph’s hasty burial in the shallow grave he shared with a farmer.

What is certain is that Paul fashioned a false tooth with a wire for Joseph before his death. This piece of forensic clue did not surface until some 50 years later as evidence that it was used to identify the badly decomposed remains. There were also rumors of disrespect to his body after he was slain: mutilated by British bayonets, stripped of his beautiful wedding suit, and decapitated.

Joseph’s remains lay in state at the Massachusetts Provincial State House in Boston for three days. The outbreak of the Revolutionary War dispersed the Masons, many of whom belonged to the British army; but on the discovery of Joseph’s remains, they returned to give their late Grand Master of the “Ancient Lodge” (St. Andrew’s) the burial he was due. On April 8, 1776, a large and respectable number of the masonic brethren, with their late grand officers, assembled to attend his obsequies, and followed in procession from the State House to the Stone Chapel (King’s Chapel).

One prominent mason was unable to attend the service. The merchant, John Rowe, had questionable patriotic political leanings and was the Grand Master of the “Grand Lodge” (St John’s). He wrote in his journal “I went by invitation…to attend the funeral of the remains of Dr. Warren.” When Rowe came to walk in procession with the lodges under his jurisdiction with their proper jewels and clothing, he was to his great mortification “very much insulted by some furious and hot persons without the least provocation.” One of his fellow masons thought it most prudent that he retire. That evening, Rowe was plagued by “some uneasy reflections in my mind as I am not conscious to myself of doing anything prejudicial to the cause of America either by will or deed.”

The names of all those who attended Joseph’s funeral in King’s Chapel are unclear. Members of the St. Andrew’s Masonic Lodge and deputy Grand Master Joseph Webb, Paul Revere, Rev Dr. Samuel Cooper, and probably Dr. John Warren were in attendence. Whether Joseph’s mother, Mary, or his children, or his supposed fiancee at the time of his death, Mercy Scollay, attended are not known. Boston was in an uproar at the time because the British had just evacuated, therefore, a good account of the attendees was not recorded.

Joseph’s eulogy was delivered by young lawyer, Perez Morton. Morton met Joseph as a minor official on the Massachusetts Provincial Committee of Safety during the early months of the Siege of Boston. Morton’s eulogy of Warren, delivered under Masonic auspices, was well received at the time. It was a notable example of oratorical eloquence and public advocacy in favor of Independence from Great Britain. The eulogy was reprinted well into the 19th century along with collections of the Boston Massacre orations.

“We will assert the Blood of our murdered Hero against thy hostile Oppressions, O shameless Britain! and when “thy Cloud-cap’d Towers, thy gorgeous Palaces” shall by the Teeth of Pride and Folly be levell’d with the Dust—and when thy Glory shall have faded like the Western Sunbeam—the Name and the Virtues of WARREN shall remain immortal.”

Joseph’s casket was taken in funeral procession for interment at the Granary Cemetery. The Minot family offered their family’s plot since the Warren family did not have one in Boston. His remains would lie in the tomb, lost to posterity for fifty years until his nephew, John C. Warren, after much research, identified the body’s whereabouts. Joseph was reburied two more times. 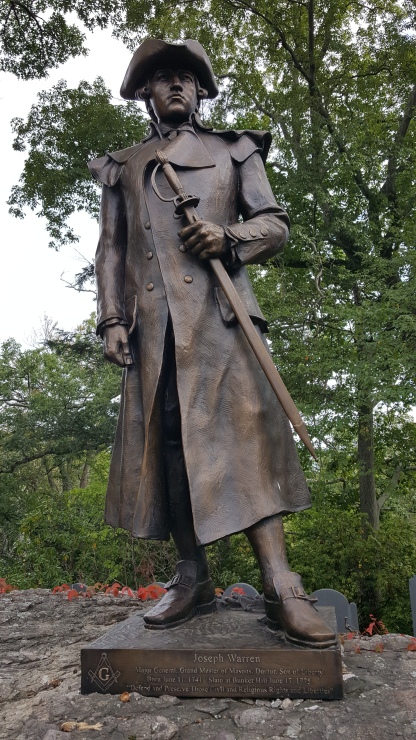 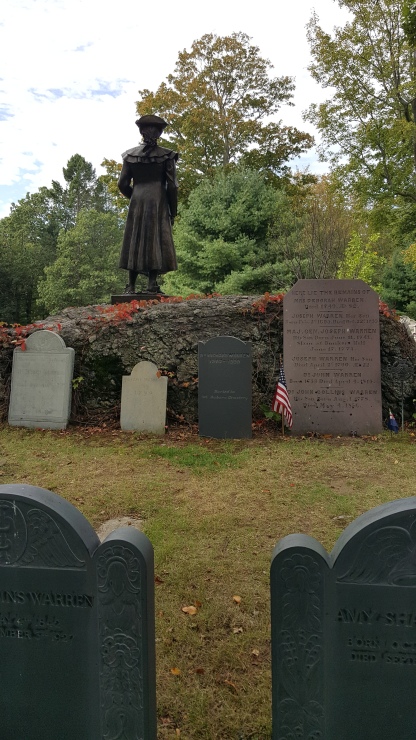 The Tory Peter Oliver’s January 1776 newspaper address to rebelling colonists cited Joseph Warren’s grisly end as just desserts for a scheming social climber and recklessly ambitious rebel against the king’s authority. In 1782, Oliver was quoted as saying, “Had Warren lived George Washington would have been ‘an obscurity.’ “

*The blog post painting is by John Trumbull, The Death of General Warren at the Battle of Bunker’s Hill, 17 June, 1775. (Museum of Fine Arts, Boston). Joseph Warren is the man in white lying on the ground in the forefront of the painting. A man is protecting him as he dies, but Joseph was shot in the face during the waning moments of the battle, therefore, his death would have been instantaneous.

*The pictures of Joseph’s grave site on Mount Warren at Forest Hills Cemetery are from my camera.

Warren, M.D., Edward. The Life of John Warren, M.D. Surgeon-General During The War Of The Revolution; First Professor Of Anatomy And Surgery In Harvard College; President of the Massachusetts Medical Society, Etc. 1874: Noyles, Holmes, and Company, Boston